Stop leaks today. Foam it and save 50% over roof replacement!

GET A FREE QUOTE

Age. Leaks. UV deterioration. Hail and storm damage. Your commercial roof isn’t immune to damage and it doesn’t last forever. But, you do have an economical and superior alternative to reroofing your commercial building. Spray Foam. Learn more below.

Spray foam has become increasingly popular in the past few years with builders across Texas as a preferred insulation method. The spray polyurethane foam is also used as a roofing material, but not many people are aware of this.

For more than a quarter of a century, spray foam roofing has mostly been used to reroof existing flat roofs on commercial and residential buildings.

Norris Spray Foam sprays foam roofing in Texas for both residential and commercial projects. Commercial buildings with flat or low-slope roofs are common in our area, and many of them have old, leaky built-up roofing, so re-roofing commercial buildings is a significant portion of our business.

When you reroof with spray foam, you can:

Read on to discover more about why spray foam may be the best reroofing choice for your building.

What is spray polyurethane foam roofing? 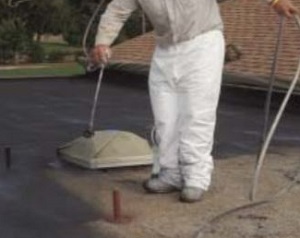 Spray foam roofing, also known as Spray Polyurethane Foam Roofing, is a material sprayed over existing roofs as a liquid, and it expands into foam to create a solid layer. Correctly installed and maintained, a SPF roof can last over 50 years.  read more

Can you install spray foam roofing over TPO, EPDM and other roofing types? 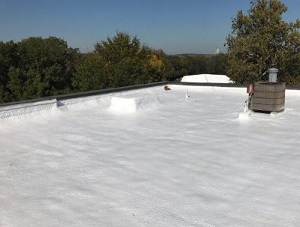 Spray polyurethane foam roof can be installed over metal, TPO, EPDM, built up, modified bitumen, single ply and existing spray foam roofs. Each type of roof is capable of being reroofed with spray foam, usually without having to tear off the existing roof.   read more

How do we install spray polyurethane foam roofing?

The SPF roofing installation process should be performed by well qualified professionals who understand the safety issues, proper handling and installation protocols for spray foam roofing.  Your new SPF roofing system will only be as good as the crew that installs it. read more

How is a spray foam roof maintained? 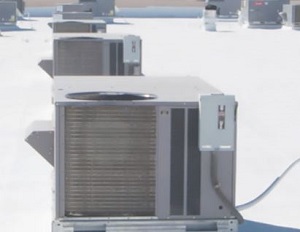 A SPF roof should be maintained annually to ensure it lasts as long as possible. Norris Spray Foam will inspect, clean and do any small patch damage repairs that might be necessary to keep your new foam roof performing at its peak effectiveness.  read more

How much does a spray foam roof cost? 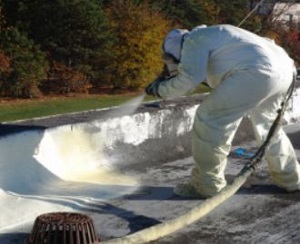 The cost of reroofing with spray foam is dependent upon the size of the roof, foam thickness, roof condition, roof preparation, and roof access.  As spray foam roofing systems don’t usually require tear-offs, there are significant cost savings in labor and disposal costs compared with other reroofing options.  read more

How long does a spray foam roof last?

Building owners can reasonably expect their spray foam roof to last more than 30 years when properly maintained.  Roof life can be extended even longer when the roof is recoated with an elastomeric coating after every 15 years.  read more

A roof is the top covering of a building, including all materials and constructions necessary to support it on the walls of the building or on uprights, providing protection against rain, snow, sunlight, extremes of temperature, and wind. A roof is part of the building envelope.

The characteristics of a roof are dependent upon the purpose of the building that it covers, the available roofing materials and the local traditions of construction and wider concepts of architectural design and practice and may also be governed by local or national legislation. In most countries a roof protects primarily against rain. A veranda may be roofed with material that protects against sunlight but admits the other elements. The roof of a garden conservatory protects plants from cold, wind, and rain, but admits light.

A roof may also provide additional living space, for example a roof garden.

A flat roof is a roof which is almost level in contrast to the many types of sloped roofs. The slope of a roof is properly known as its pitch and flat roofs have up to approximately 10°. Flat roofs are an ancient form mostly used in arid climates and allow the roof space to be used as a living space or a living roof. Flat roofs, or “low-slope” roofs, are also commonly found on commercial buildings throughout the world. The National Roofing Contractors Association defines a low-slope roof as having a slope of 3-in-12 or less. Flat roofs exist all over the world and each area has its own tradition or preference for materials used. In warmer climates, where there is less rainfall and freezing is unlikely to occur, many flat roofs are simply built of masonry or concrete and this is good at keeping out the heat of the sun and cheap and easy to build where timber is not readily available. In areas where the roof could become saturated by rain and leak, or where water soaked into the brickwork could freeze to ice and thus lead to ‘blowing’ (breaking up of the mortar/brickwork/concrete by the expansion of ice as it forms) these roofs are not suitable. Flat roofs are characteristic of the Egyptian, Persian, and Arabian styles of architecture.

Spray foam is a chemical product created by two materials, isocyanate and polyol resin, which react when mixed with each other and expand up to 30-60 times its liquid volume after it is sprayed in place. This expansion makes it useful as a specialty packing material which forms to the shape of the product being packaged and produces a high thermal insulating value with virtually no air infiltration.